Grungie wrote:Sup I'm Grungie. I'm currently running my own forumotion forum, and a mod on Mxtabs. Just looking for places to post and people to meet.

People try calling me out as a weaboo but it's kind of strange since I'm actually Japanese and should be exempt from that title. 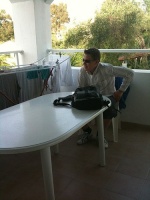 Dude, it says right under his avatar he's from Leeuwarden.

Dude, it says right under his avatar he's from Leeuwarden.

It does now, it didn't yesterday.

Soon, this will all be ours, fear us, fear us.

I posted this first in "What inspired you to pick up the bass" but I figured it was a good introduction as any.

I'm 17 and I'm from Manchester, England

When I first started getting into music about 2 and a half years ago I got really into Muse and Radiohead*1 and back then I was absolutely blown away by both of those bands. At first I was really inspired by Matt Bellamy and Thom Yorke's voices but after realising I really can't sing whatsoever and I really lack the confidence to be a "frontman" I looked elsewhere. I really loved Matt's guitar playing but I have extremely short and stubby fingers and I got really annoyed and impatient with the guitar because of this and since my Mum wouldn't let me get a drum kit I just picked up the bass and stuck with it.

For the first year or so, all I really did was learn Muse songs and by a few other bands while learning next to no scales/any theory whatsoever. This led to me discovering Primus which in turn made me think "Damn, am I glad I picked up the bass if that's what I have to work towards..." However about 6 months ago I got in a really bad rut and pretty much left my bass alone for like 5 months. I maintained most of my technique ability and general knowledge but I feel like I'm learning everything all over again and it's all pretty overwhelming and making me feel useless. I'm currently playing more than ever*2 after applying for a music college to improve my musical abilites and also to meet some cool people*3 and hopefully get in to some bands and start playing with other people.

*1 I still am, although I can't really appreciate much post-Absolution Muse anymore
*2 Kinda... Damn you Skyrim!
*3 And more specifically one very lucky lady who will, hopefully, recieve the best 2 minutes of her life courtesy of me.

Right - I guess it's time for a few words here then as well.

Some of you probably saw me in chat already but I thought it might be nice to introduce myself here too.

My name is Markus, 33 (at least for another bit lol) originally from Germany but living in Ireland now since about 6 years. I started first playing bass when I was about 15 - 16, played for about 3 years and then girls, work etc (especially girls) became a lot more interesting then playing bass. Over the years I kept saying that I have to take it up again, at least once or twice a year I would be looking at a bass but never actually got around to it.

About 4 weeks ago I finally made the decision and got myself a cheap J&D bass - well the neck is slightly bend and it doesnt sound a million bucks but it got me off the ground. Having a Fender Squire Vintage Mod. Jazz Bass arriving on Tuesday though (yeah - early christmas) which should sound a tiny bit better

Well, i'm back to square one really in terms of playing so its all about getting them fingers moving again and re-gaining an "ear" for it again. Kris' stuff has helped me hugely, the videos, descriptions and his new book all are extremely helpful and really got me going again - so thanks again for that Kris!

So - that would be me done lol

I believe there was a German fellow here once, before my time though.

Gotta say - its a nice place here, thanks for the warm welcome

im jonny, ive been playing bass about 3 years now, im in a band called lesbian sex show, (yes i came up with the name), im currently playing an ibanez SR500, i live in worcestershire england and my greatest bass influence is john entwistle. (i wouldnt play bass if it weren't for him) 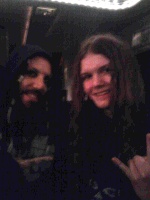 nope, just a four string, ive never played a 5 string before, i dunno, i just feel like its gonna be too guitar like? i dunno how to explain it, i just prefer 4 strings

Entwistle... I suppose you could say he was at least alright at bass, I suppose...

dont get me started on him

, from where i stand he is/was/and always will be, the greatest bass player to have ever lived. but thats just my opinion.... haha

jonny121 wrote:dont get me started on him

, from where i stand he is/was/and always will be, the greatest bass player to have ever lived. but thats just my opinion.... haha

Indeed he is, and The Who is the greatest band to ever have graced this planet with her precense.

Actually, EADGC can be achieved on some basses. Saxton has that kind of tuning. He buys a 6-string set and then throws out the low B. Of course, he plays a limited edition Warwick Thumb which costs more than my whole house

I didn't say it couldn't be achieved, I said I'd probably find BADGC more fun

Hi everyone,
I've always wanted to play since my dad brought one home a few years back, and I'm so glad to be learning now. I play a left handed model of the Dean Edge 09. I've only been playing for..5 days now! Time flies.

Anyway, I'm so glad to have stumbled along this forum and I can't wait to learn. Oh, and Happy New Years!

That's the same bass I started on, the righty version that is