sounds to me like it could only be good, bass guitars are never recognised as much as they should be. So even if it is bad, at least they took the time to add in something for bass players.

I've heard nothing but good things about it from Ultimate Guitar forums so I'd assume it's pretty good, especially for beginners like you.

I've been playing with Rocksmith for about a week now, and I have a bit of mixed feelings, but mostly like it. My only real drawback so far is that I find myself concentrating on the notes coming at me so much that I don't really actually learn to play the song. If I learn from tabs, for example, I can usually roughly play a song from memory after a couple days of working on it. With these songs though, I could play them fine if a Rocksmith screen is in front of me, but if it were gone, I'd not remember how to play any of the songs I learned from it.

One thing it really did for me was began to fix my timing. When I first began using it I was playing some songs I already knew, and was really messing up on my note timing. I was thinking how silly it was, and how nobody could play that song in this flawed way. Then i just realized it was forcing me to keep perfect pace for the first time ever. Another plus is that when playing progression mode, you have to play a variety of songs to unlock new ones. I find myself enjoying playing several songs I likely would have never tried to play otherwise.

The biggest benefit though I think has been that it really gives me a challenge in practicing that keeps me going, to try and unlock more songs. I practice a couple hours a day now, instead of the hour or so I used to try and devote. I will say that I'm glad I use a 5 string bass, as the game stops to make you drop tune your E string for some songs. I just use the B string instead, so I never have to change my tuning. Dogs are often lazy that way, after all.

I always prefered a 5 string for that very reason

I played quite a few songs in drop D or even drop C tuning. It's a life saver!

Just an update, as it turns out my fear of not properly learning a song may not be an issue. I managed to get a couple songs up to "Master" level. At that point it had me perform with no notes or strings visible on screen, so it was just my bass and the music to play along with. I actually managed to get like an 80% accuracy on one of the songs in that mode after a couple attempts. I guess that isn't bad for an early effort, especially as I only played the song maybe a dozen times in practice mode before doing this.

You probably spend the same amount of time perfectly learning a song as people without Rocksmith do, just doing it in a different way. I haven't played Rocksmith, but I instantly dislike it a little because there seems to be very little room for experimentation. When I learn a song, I spend just as much time developing and messing around with the bassline as I do actually learning that bassline. Helps immeasurably with refining your creative ideas. Yeah, I'd say that you could use Rocksmith as a tool for learning songs, but not so much actually playing them. Play the songs without it, mess around with the bassline without being told by the game that you're doing it wrong

That said, the guitarcade looks to be brilliant fun

Actually Pip, that depends on "player level" so to speak. If you'll recall, I believe we all played bass lines note for note in the beginning, before actually getting the courage to experiment. You do learn a lot of decent patterns when learning note for note. They become a part of you and you play them out of reflex without even noticing, thus enriching your bass lines

That said, I'd never recommend a video game for learning a song

It's possible that the game mechanics allow for some accidental customizing. For example some single notes that come in fast time I hit a single sustained note on the string and get credit for both. Of course this is not because I'm trying to perform my dog magic to personalize the music but usually is because I suck and miss the timing on the notes. It also lets you add notes that it didn't ask for.

Of course it isn't working with a meter like Guitar Hero does, so you can't actually get kicked out of a song. So if you don't care about running up a score you can really do anything you want in there and just use it as a sort of backup band simulator.

Ive been using rocksmith for a while now, (started with guitar but decided to try bass last week). IMO Its a great tool for beginners, it helps kick some of the monotony out of repeating songs till you nail them. It gives you a score so you have a way to gauge your progress. The mini games (theres 7-8 of them)help with scales, bends and learning muscle memory going up and down the fret board etc etc.

It has also opened up new music to me that I perhaps would never listen to had I not heard it on the game.

Of course all of the above can be done without the game, but to me, the biggest stumbling block in learning an instrument is the repetition. This game helps, for example when I was learning guitar I would pick up the guitar, do some twiddling about, play a couple of songs and put the guitar away till the next day. With this game I found myself sat for hours at a time trying to beat scores, playing the mini games, practising the riffs in the slow mo practice section.

Everyone uses different methods of learning but this is a well implemented (mainly, the tuner sucks ass) tool for helping beginners. Hardened players will probably not get much from the game. 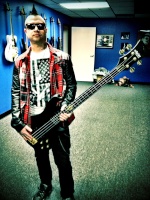